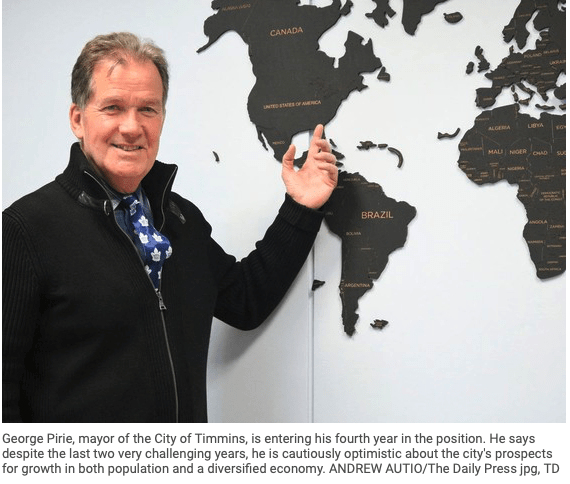 George Pirie has been impressed with the resilience and determination of the people of Timmins throughout another very challenging year, and feels the city is poised for a prosperous 2022.

Heading into the fourth year of his term as mayor, two of which have been heavily dominated by the COVID-19 pandemic, the former mining executive told The Daily Press that everyone has been working hard to keep positive momentum going, as best as possible, despite the very uncertain and turbulent times.

“It’s a testament to the will and the ability of the people of Timmins to work together.”

On May 17, the city declared a State of Emergency amid a spike in COVID cases, which was lifted on June 23. Pirie said he has been pleased with the response from the provincial government throughout 2021, including the procurement of vaccines which in turn eased strain on the healthcare system.

“Most importantly, our institutions like Timmins and District Hospital, and the Golden Manor, as well as the other facilities for the aged, fared very well,” he said.