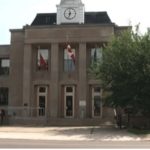 A run on toilet paper sparked by fears of a shortage have led to a request from City of Peterborough officials urging residents to not flush anything other than toilet paper after a bathroom break.

Unfounded rumours of a TP shortage have sparked a few suggestions about what else people could use instead, said City of Peterborough Otonabee Ward councillor Lesley Parnell.

Parnell says there are no reported issues yet, but there is a concern from the utilities commission about what may be making its way into the sewer system if people are flushing more than what mother nature intended.

“It’s actually very important that we take precautions now, so that we don’t end up getting ourselves in, shall I say, a big mess,” Parnell said.

Parnell says there are concerns that residents who are unable to get their hands on toilet paper will start using things which aren’t intended for the city’s sewer system.